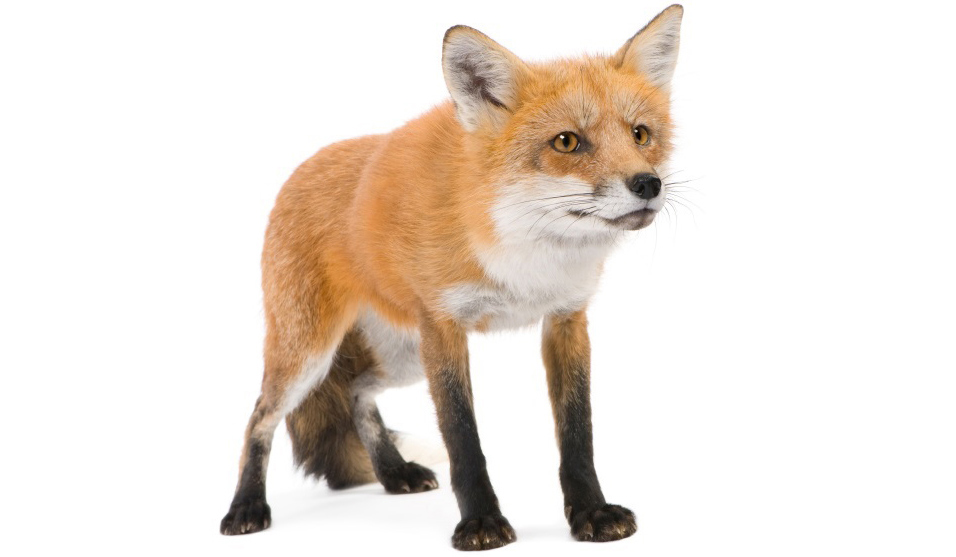 The earliest fossilised specimens of Vulpes vulpes were uncovered dating from between 3.4 – 1.8 million years ago. The red fox is widespread and distributed throughout Europe and also much of Asia, North America and North Africa.

The fox is a member of the dog family, resembling a small dog with males weighing approximately 6.5 kg and measuring 110 cm from tip of head to the end of the tail. Both sexes are similar in appearance with males being larger than the female weighing 5.5 kg with reddish brown fur, white tail tip and sometimes a white bib on the throat.

Mating takes place during January and February and the cubs are born after a gestation period of 53 days. The average litter size is 5 with weaning starting at about 5 weeks before the young cubs are ready to leave the vixen when they 3 – 4 months of age. Foxes have a lifespan of approximately 9 years but as many as 80% die in their first year.

Foxes can be found in a diverse range of habitats such as farmland, moors, mountains, woodland and built up city areas. It is very successful in adapting to almost anywhere and it is this success and close proximity with humans that gives it status as a pest species.

Foxes often cause nuisance such as noise from screaming or barking, digging lawns or flower beds, and damage to refuse bags leaving litter and food debris everywhere. Damage to livestock can also occur with the taking of poultry and family pets, including cats. There also is often concern of the implications of possible disease transmission. There is evidence that foxes can spread mange to dogs, which is a skin infection from the result of mite leading to loss of fur and possible death of the fox. Foxes also carry the roundworm Toxocara canis, which is responsible for blindness in children. However, this is often associated with dogs and there is no evidence of any case of children contracting toxocariasis from foxes.

How we control Foxes

Foxes can be a very political subject and in some cases have to be controlled. If control measures are essential then we can employ the use of humane live capture traps, which are placed in a suitable location that is discrete and away from areas of being tampered. These are baited with food and water and inspected daily. Other possible measures include shooting by a fully trained marksman in full liaison with the Police.

If you require any advice or a no obligation quote for our Wildlife Control Services, please feel free to contact us...